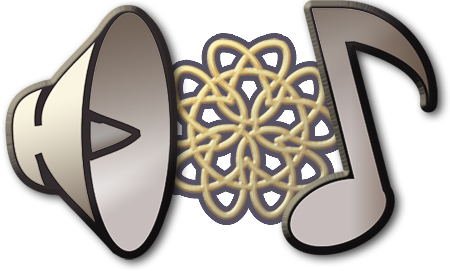 You can easily add music and sounds to your Dream on Furcadia! For music files, Furcadia supports WMA, OGG, MOD, S3M, WAV, MP3, MP2, and MIDI music formats. As for sounds, they should be WAV sound files. Check out this tutorial to find out more about attaching these files to your Dream's patches.

MIDI files are the most common file type used to play music in your dreams. MIDIs tend to be rather basic, in terms of musical depth (no vocals), but they're great to add to your dreams because of their small file size. Other types of music files tend to be quite large (WMA, OGG, MOD, S3M, WAV, MP2, and MP3), and since Furcadia has an overall patch size limit, you may want to look online for ways to compress your files if they're not already MIDIs.

Wav files are the sounds that you hear in Furcadia - the bells, bird chirps, water splashes, spring noises, etc. Wav files are different from music files in that they're all named S#.wav. There are currently 100 sounds that come with Furcadia, so the .wav files are named S1.wav through S100.wav.

When you include a .wav file in your patch, it is generally best to give it a number that doesn't already exist. This is useful because it allows you to use both the original sounds and the sounds you included. If you were to add a new .wav to your patch and named it S1.wav, you'd be replacing the S1.wav that is normally heard.

Wav files are actually a container file, which means you can take any of the supported music formats and rename their extension to .wav, and Furcadia will be able to play it as a sound. MP3 files for instance are already compressed and tiny files as they are. If you wanted to use an mp3 as a sound in your Dream, change the extension of the file from .mp3 to .wav instead.

This container aspect of .wav files can be very useful, because sound files in Furcadia can overlap each other with DragonSpeak. You can trigger multiple sounds to play at whatever intervals you want and all those sounds will play simultaneously. Music files, however, will stop the first music file to play the second music file - this means that music files do not overlap each other. If you trigger multiple music files to play at the same time, only the last music file listed in the effects of that trigger will play.

The Music of Furcadia

Furcadia's music evokes the feeling of being in a magical land. It has some recognizable influences from world cultures, but they come together with original ideas from the composers to create a unique soundscape that you can identify as Furcadian. You can download the files here (they are also included in the Furcadia installer by default), and below that there is even more information about the composers who made this music for Furcadia!

The original Furcadia MIDI music files were composed by a talented band known as Team Fat, which is led by IGDA Award winning George Sanger and includes Dave Govett, Joe McDermott, and Kevin Phelan. In particular, George is well known in the game industry for composing music for more than 200 different computer and video games since 1983. Team Fat are cosmic cowboys, shining like comets, with music in every inch of their digital trail-blazing forms. Each member of the team composed one tune for Furcadia, and Dave even donated 3 additional piano sketches!

Gene is a versatile composer who wrote two pieces especially for Furcadia, including Tarantella Alfredo and The Streets of Furcadia. He was trained in classical piano from an early age at the Academy of Moldavia, and he's also written several techno pieces.

Aleksi is the composer who wrote the music in Theriopolis on Furcadia and even used to write music for Finnish TV shows. He is a dilettante musician, writer, and entrepreneur extraordinaire, whose interests vary from Pratchett to Potemkin.

Sam re-arranged Furcadia's original MIDI music into modern sounding mp3 files for the Second Dreaming project! She changed the orchestration of several pieces, including making alternate versions of the original pieces to make them more versatile as well as adding a more fantastical feel to the soundscape to inspire a creative mood. She has a BA in Music from the University of North Texas with a concentration in percussion.