Persona Roleplay encompasses a wide range of live group storytelling, including anything from serious fight scenes or having your character meet others in a bar, to the more lighthearted: personifying yourself with animal characteristics while chatting with your friends. It's a fun way to start up a story with other players and see what happens when your character interacts with someone else's. Most Roleplay that happens in Furcadia is this type of freeform activity.

by players typically have rules about conduct and setting. Once there is an established Continuity and general policies, players will Roleplay what they want without a Gamemaster (GM) / arbiter / bot enforcing the system. 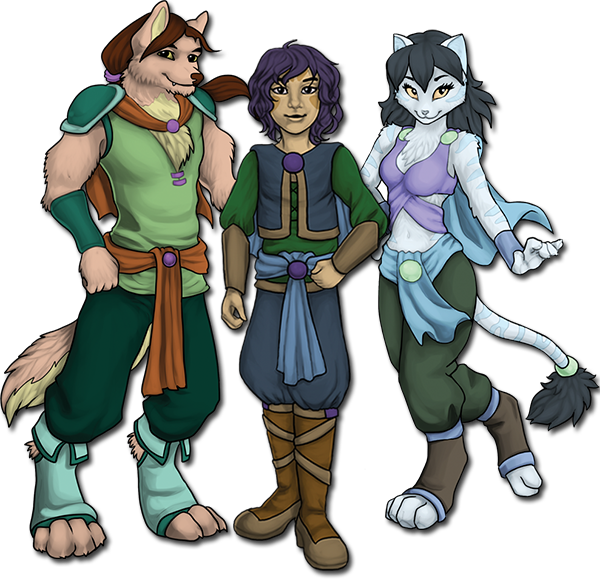 Persona Roleplay is Furcadia's default form of Roleplay. In the main maps for Persona Roleplay we uphold one main rule called the Consent Rule. Very simply: If somebody poses or says something that implies your cooperation, you have no obligation to reply to their post.

The Consent Rule is the baseline (or most basic form) of Persona Roleplay, allowing anyone to Roleplay any way they want without interfering with other characters. This helps create a relaxed environment where everyone can have fun! Note that in private Dreams, there are often other rules in Persona Play, including setting, conduct rules, and sometimes even a Continuity - but these are specified by individual Dream Owners and the people they designate.

Why the consent rule? It helps every player feel like they're 'in control' of their character. It means that no one can force your character to do anything you don't want them to.

In basic Persona Roleplay, you have a lot of control over your character's life. To be polite, you should privately ask for another player's permission to attack their character or to pose anything that requires your OOC or IC cooperation. Of course, if you don't ask them, they might just ignore your attempt to interact in an adventurous fashion.

Others will consider it extremely impolite to use the Consent Rule to evade the logical results of your IC actions. That especially means using it to get out of a fight. If your character provokes another verbally and they respond with physical violence, it is considered poor form to call "Consent" and walk away. The Consent rule isn't intended to let you avoid IC consequences; rather it keeps other players from dictating your character's actions. Additionally, most player-run Persona Roleplay Dreams enforce rules about not using the Consent Rule to avoid fair IC consequences.

Secrets and Your Description

In Persona Roleplay, other players have the right to assume that they know anything that you put in your character's description. That means that if someone walks up to your character, they may call them by name, even if they have never met your character before. If you want something about your character to be known as an IC secret you should say so explicitly in your description.

When Somebody Won't Cooperate

Furcadia's Staff won't be the authority figures when you Persona Roleplay. If your character walks into a restaurant and uses a flamethrower to set all the tables on fire, but nobody reacts to this IC action, we won't do anything.

If you are in a private Dream, the Dream Owner can easily eject or banish a troublemaker. If you are playing on a main map, you can also put any person on your ignore list as well as choosing to not Roleplay with them.

The Dream Owner or the Rah and the people they designate have complete control over their own Dreams.

They set the setting and conduct rules for everyone to follow, which are usually posted on their Group page, website, or in-Dream rules.

However, many player-ran groups host Roleplaying Dreams all throughout Furcadia. You can find one that suits your liking on the Groups pages!