Gryffes are Felines or Phoenixes who had some kind of connection to the Dark Prime Peristane or Light Prime Saligor, causing them to grow wings and receive a mixture of feline and avian characteristics. Some Gryffes also have had a connection to Primes in their ancestry, which is then sometimes manifest generations down.

Hyoomans are the stuff of myth in the minds of Furres. However, very recently it seems a few have slipped through the Dreaming Veil. Although it is rare, when Furres do come across one, they aren't sure what to make of these furless, tailless creatures.

Kirins were discovered in Taigoria within the Olde World, hidden in the mists shrouding their temples. Not much is known about these elegant creatures except that their lore confounds even the most learned of mages.

Equines are the most common Merfurres. They tend to be highly territorial and place great value on privacy and secrecy. They are superstitious and think that witnesses to their elaborate dances and ceremonies rob them of their effectiveness.

The Merfurres have gills, so they cultivate corals into great cities at the bottom of the sea. Light and Dark Merfurres dwell apart in different places, and there are often wars taking place between them.

Phoenixes, also known as Byrddes, are a lost race from a primordial part of Drakoria. They call themselves the "Children of Saligor" and may have originated from Zephiroth, a floating forest island.

Their special ability is to burst into flame intense enough to melt steel. The eldest amongst them can disappear, reappearing at their own familiar nest, although this power of "Fire Recall" doesn't work in the Olde World.

These are the rare and elusive snake people of the Dragonlands. Related to Nagas something like the way Faeriefurres are related to mortal Furres, the race of Serps are a shy people. In ancient days, some Serps would eat Furres, but most of them today would be appalled by the idea.

They prefer to hunt for food, and many of them enjoy eggs too. Serps can be very kind and philosophical.

Svallfurres live underground, usually inside of mountains. They are peaceful, quite long-lived, and love to create things very slowly. When they do come out of their caves, they take to the seas in finely crafted ships.

Dark Svallfurres become hoarders of treasure, going out to raid, or demand tribute from small villages. They are much shorter than a typical furre, though they resemble ordinary Furres of the kinds that like to live underground or on shores. The typical Svallfurre has big claws for digging, very little neck, and a patch of long lush fur resembling a beard on their chest. They generally prefer to eat hearty stews made of roots and berries and fish.

Light Svallfurres live together by following a long but very practical list of rules. Dark Svallfurres, by contrast, are always quarrelling-- their weak point.

Unicorns are equine Furreswho had some kind of connection to the Light Prime Aristaya (or their ancestors did), causing them to grow wings and sprout a horn. Some Unicorns also have had a connection to Primes in their ancestry, which is then sometimes manifest generations down.

Mythical Ferians are often Ferians who accomplished some kind of reputable deed which impressed a Prime, but then chose to stay Ferian and gain enhanced features, such as wings, horns, etc. Some are blessed by Dark Primes (Purrwings, which are four legged felines that gained dragon characteristics via Dark Prime Dyarr/Dyarra), while others by Light Primes (Unicorns, or Ferian equines with a spiraled horn via Light Prime Aristaya). Some Ferians also have had a connection to Primes in their ancestry, which is then sometimes manifest generations down.

Minkins are tiny, yet fully-grown magical creatures that seem to choose to be small. They have an affinity for shiny things, and usually fly.

Drakkins (miniature dragons, even smaller than Minidrakes) were the first of the Minkins, magically conjured by Light Primes Beekin, Syndira, and Jujinka. Later on the Dark Primes Mirmoggin, Lokira, and Dyarr/Dyarra created the Lemurkins in response (small, flying lemurs with a rack of ebony horns). Many other Minkins have begun to appear since then. 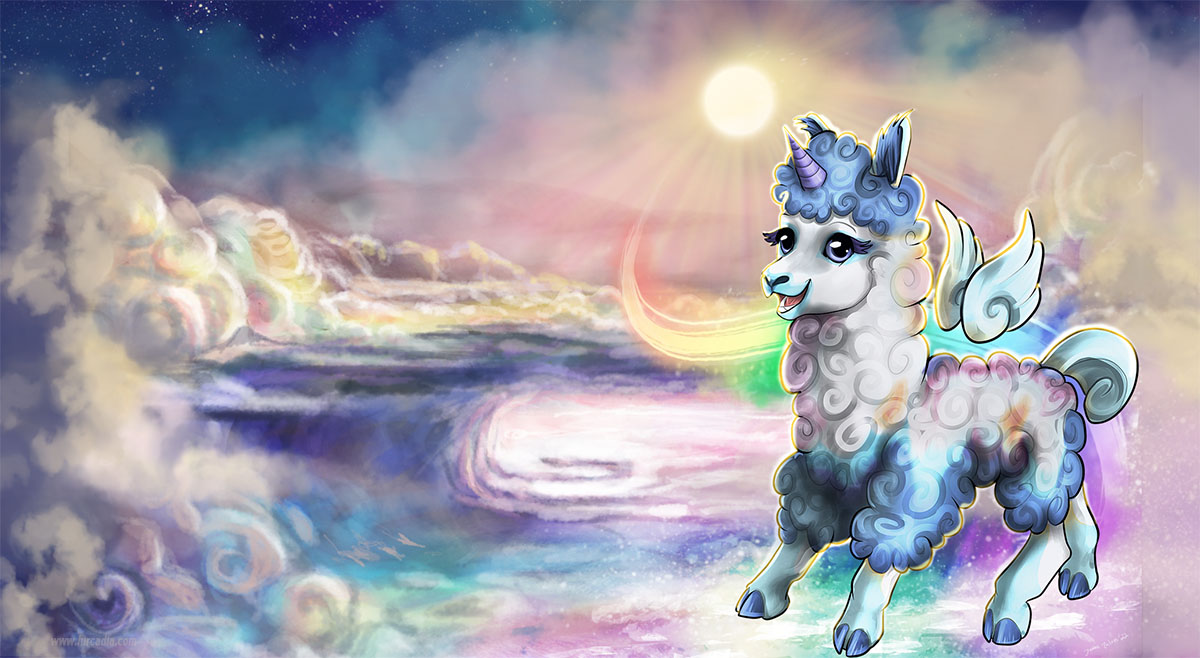 SkyPuffs are a creation of the Primes, also affectionately dubbed Lightbringers. They use their cosmic powers to keep track of things on Earth and protect furres against surprise Dark Prime antics. Their magical core often contains aspects of the sky, stars, or aether, and they are often winged.

Originally, the Dark Prime Tallus lived as shattered pieces in the sky, known to the Waking World as stars. According to the Prophecy of the Stars, once the stars aligned, he would coalesce from his star-piece self and fall back into Yezaad, the Dreaming World, from the sky. When he did, the Dark Primes would regain their thirteenth member and become extremely powerful. Many sinister plots have hinged upon the day Tallus rejoined their ranks.

Prime Licharra, watching the change in the sky, came to her brother Prime Jemmion and explained that she had believed Dark Prime Tallus had reformed. They both came to their powerful brother, Prime Viverravus, who had defended them from Dark Prime Tallus last time.

The Light Primes then used the Second Moon (which was used to see through illusions in the Book of Wyrmmes) to create the first of the SkyPuffs, the PacaPuff. These new creations would be Lightbringers to watch over from the skies, protecting both furres and the Light Primes from any surprise tactics of the newly empowered Dark Primes.

Gargoyles are rare hired protectors of restricted places within the cities of Drakoria, though some have been seen in the Olde World. They have hefty muscles and often have broad wings. These stoic beings have the innate ability to disguise themselves as being an inanimate stone statue version of themselves, which is why they are treasured guardians.