Werefurres are cursed victims who, under certain conditions, turn into huge, four-legged versions of themselves. They are blind with rage and pain, and are driven to try to murder. Conditions for changing back may include having to kill an animal or a Furre. This is always a curse. Most animal types are were-capable, but notably there are no Were-dragons or Were-bugges.

There are very few tales of the Werefurres, but it is said that some can grow to be three stories tall, capable of walking over and through barns, houses, and castles. Also, Werefurres heal in 1/3 normal time. 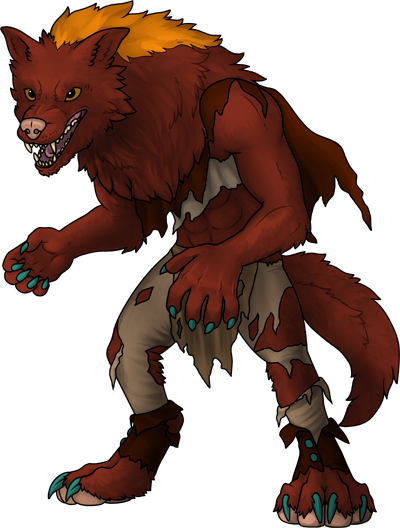 The power to shapeshift in the Dragonlands comes with a curse, linked to old rituals practiced by Furre Shamans. Werefurres originated in Drakoria at a time when there were no cities, only large villages, and Furres tended to live in wandering tribes. Some say that Werefurres were originally invoked in times of dire need to protect the tribe, and that since then they became their own masters.

Werefurres tend to be loners due to their curse, living apart from each other as well as from normal Furre society. They also instinctively despise the sign of the Vinca. Unlike Vampfurres, they are highly capable of destroying something marked with one, and usually they will go out of their way to do so.

There are 3 known ways to become a Werefurre:

In addition to their Furre shape, Werefurres often have two other morphs, or wereforms. One is the form which they always assume when the moons are full, since the light of the full moons forces the transformation. The other is a form that they can assume at will.

An upright bipedal form just like normal Furres except for an ability to heal more quickly. However, those with this form usually don't heal quickly enough for the effect to be visible.

These are 4 legged versions of their Furre form. Some can assume this shape at will, but those who are bound to take this shape when the moons are full can only return to their true form again by murdering a Furre. Because of this, bestial forms normally inspire fear, and if one is seen in a city or village, the villagers will quickly try to track and kill it.

Those with this form grow 1.5 times their normal size, have longer and thicker arms, and move by loping on all-fours half the time. They are notorious for attacking by biting and shaking their victims, and then tearing them apart. Unfortunately, an Abomination can only return to their true form by murdering a Furre and eating their heart. Due to this, Abominations inspire such blind terror that those glimpsing one will panic and run.

The Furre shrinks to a mere 9" tall! This vulnerable Wereform's strength is reduced as drastically as its size. However, its durability is equal to that of a full-sized Furre. A running or climbing Kavani can cover distances as quickly as they could in Furre shape, but can only leap twice their height: around 18 inches.

Werefurres with this form will transform into it only when enraged. They grow 3 times their normal Furre height, and their body widens proportionally as well. Although their ability to cover ground is tripled, they have very limited ability to jump. Their paws become very ham-like, lacking manual dexterity, and thus have difficulty wielding tools or weapons. While in this form, they also have trouble thinking straight, but will usually revert to regular Furre shape when they calm down.

In this form, the Werefurre grows two heads taller than their normal Furre height, and become powerfully built. Their bodies become covered with crusty alligator-like hide, and out of their knuckles grow foot-long, serrated bone spikes which are usually used as punch-daggers or knives. Their claws and necks elongate twice as long, although this makes them tend to hunch over like a vulture. Transforming into the Serpenti form leaves the Werefurre so exhausted that they fall asleep for awhile after assuming this shape.

This Werefurre form is one head taller and nearly twice as wide as the original Furre, leaving them slow but strong. Their fur sheds and they grow four horns from their crown like an oryx or gazelle's. They also have great trouble speaking while in this shape. Due to the intense experience it takes to assume this form, most Werefurres who have it don't think of it as useful, and it has been nicknamed the Bath of Pain.

Note: A child of two Werefurres will have Daimoni as one of their morphs.

This is the most common moon-linked wereform for those cursed by a Shaman. The Furre finds themself forced into the shape of a bird; most commonly a Scarhawk, Ostrix, Kiwi, or Raukor. Unlike the other Wereforms, the Aviani is as easy to kill as any normal bird of that type.

The Furre takes on a different Furre species. For example, an Equine might become a Rodent. They may or may not keep the same gender or colors but they always keep the original Furre's clothing. This is because the Menalti form is a very evil being, jealous of "The Other One", and wants to wear the Furre's own clothes. If a Werefurre with a Menalti form dies, they come back as the Menalti-- permanently. The deeds done while in Menalti form are not remembered by other forms.

Werefurres can regrow a lost digit, limb, or sensory organ. This does not apply to tails.

With this object, usually an amulet, Werefurres may change into their other forms and back. If it is lost for some reason during roleplay, the player may choose to have the character find another after a month has passed. They are custom-made for that particular Werefurre by Dark Shamans, normally in exchange for some dark and evil act.

You can tell by sniffing from nearby when someone else is also a Werefurre. This smell is not pleasant; it is similar to the smell of sour milk and sewage. It doesn't go away no matter how much they bathe. The other Furre is probably aware that you have sniffed them; this is not a subtle power.

If you cut off a Werefurre's tail, they lose the power to shapeshift. The tail will remain warm and fresh and alive so long as the Were is still living. If it is placed back in its original place, the tail will grow back onto the Werefurre's bottom in less than a minute and the ability to shapeshift returns.

Werefurres take heavy damage from silver or blessed weapons. However, they are immune to all damage from weapons wielded by a Vampfurre, even silver weapons.

Werefurres make Dracosaurs (riding-dragons) very uneasy; they will at best refuse to carry a Werefurre, and at worst, if in a group of dragons, attack.