Allegria Island is an acropolis scattered with the remains of ancient temples to the Primes. This place is especially rich in Dream energy. Just face an arch you like, and press Ctrl-T to upload your Dream. This is a T+ environment. Use F3 to move between multiple points around the Dream. 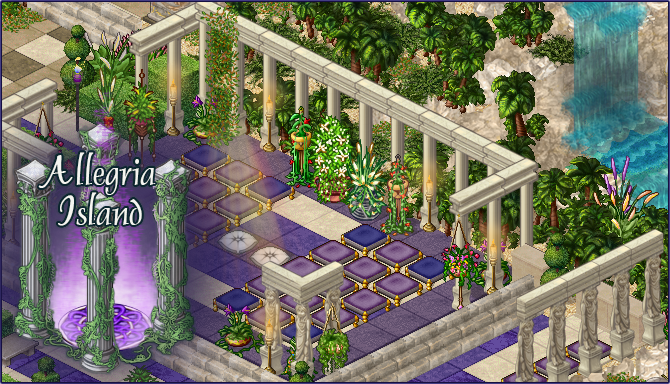 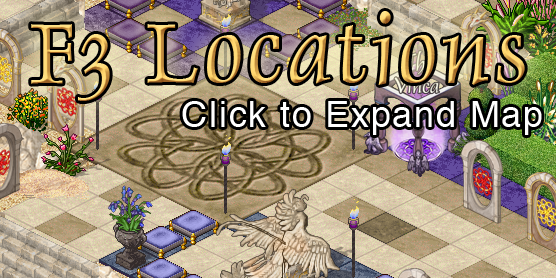 Warm sunlight glints brightly off of pale sands across the island. The lazy chorus of gulls fills the air, accompanied softly by the sound of waves breaking on the coast. Crafted by Light Prime Dahlsea of Ships and Fishes, this medifurranean paradise provides a perfect place to relax for weary furres and holiday-goers.

Soft, gentle beaches surround the southern coast and boast a variety of colorful marine wildlife. The docks of Thelcoda's Landing lead from the ocean straight up the cliffs to the communal area where furres may gather to socialize or even witness a marriage in the Wedding Chapel!

This island celebrates a poetic neutrality and balance. On the west side of the island, the waters from The Baths of Light run down the cliffs to meet the sea while The Pools of Dark do so to the east. At the very peak of the island is the Hall of Dreams which features an awe-inspiring view of the surrounding seascapes. The closest island to the northeast is Sanctuary, and off to the northwest are the famous floating islands of Vinca, Vohwa, and Zephiroth. 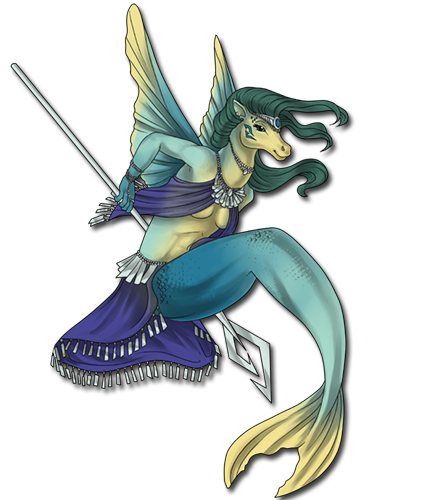 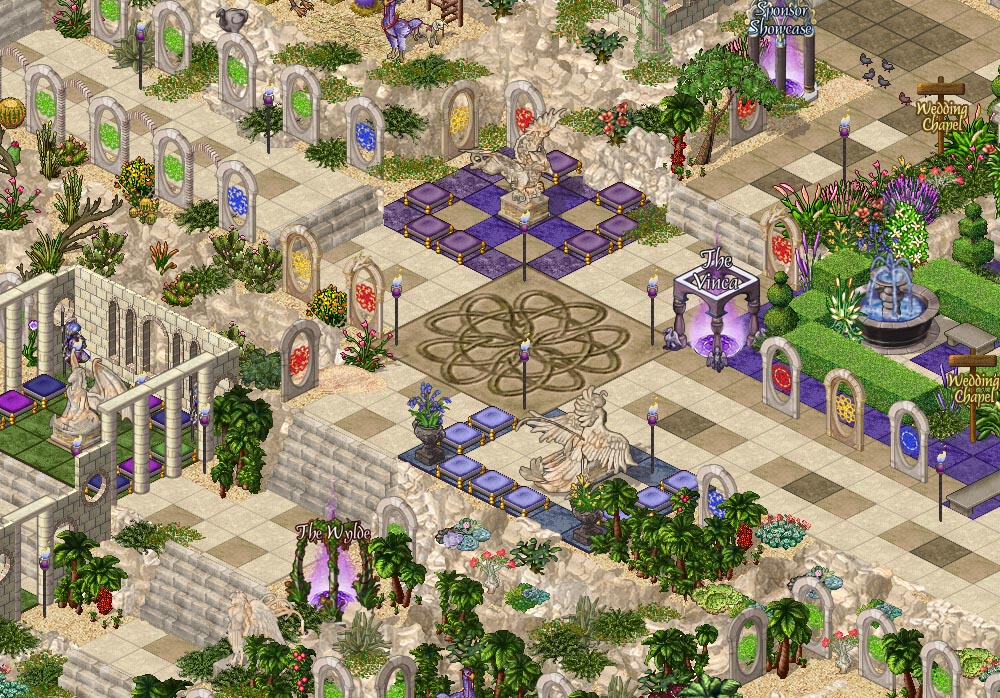 It is told that Light Prime Dahlsea is the main creator behind Allegria Island. When she started weaving the island into the fabric of the waking world, the nexus point where she began was called the Vinca Crossroads. This area sits at the very center of the island and hosts a portal that bridges Allegria Island to the Vinca Nexus. 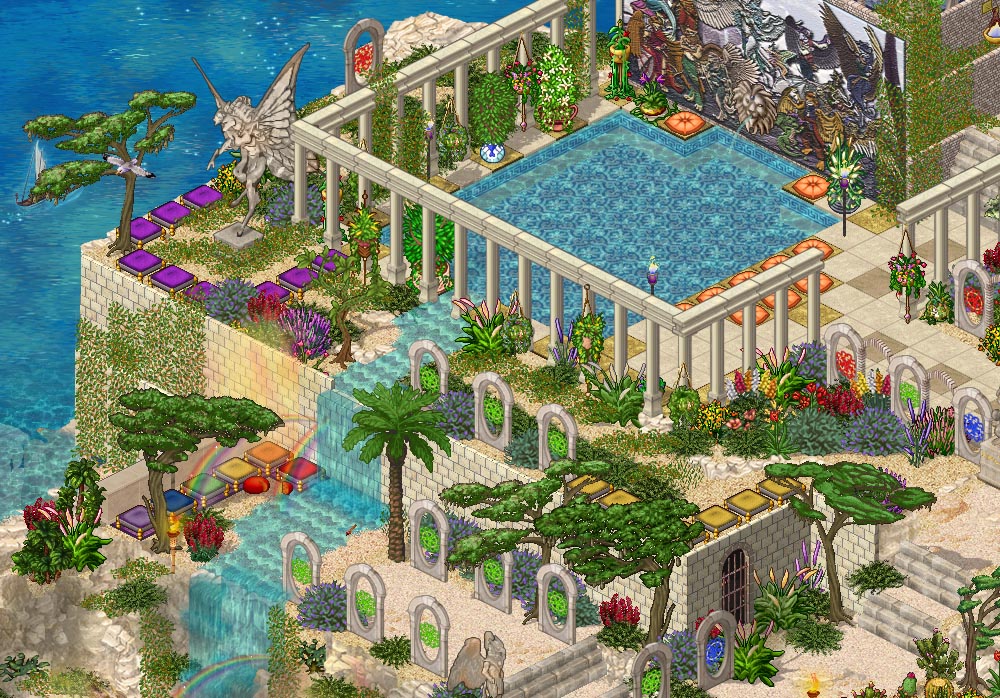 After forming much of the island herself, Prime Dahlsea invited Light Primes Jujinka and Patrilius to help create the beautiful Baths of Light. It was to be a place where furres celebrate good things, such as love, wisdom, and beauty. Jujinka blessed the Baths with her loving glow while Patrilius blessed the Baths with wisdom. When the waters began to flow down to the west, Patrilius created a mural to pay homage to the Light Primes.

Furres often visit the Baths to seek wisdom in difficult situations, to feel Jujinka’s love and acceptance, or simply to bask in the beauty of life. Some time after creation, the furres of the island created a statue in Jujinka’s likeness to honor her.

Cliffs of Dyarra / Cliffs of Insanity 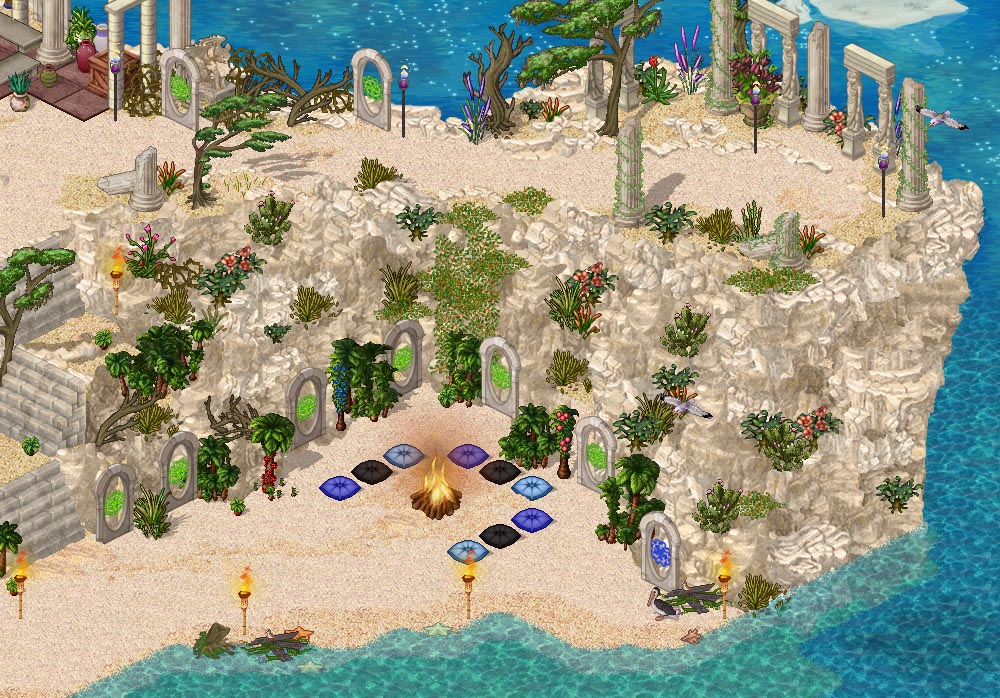 Dark Prime Dyarr/Dyarra got wind of Light Prime Dahlsea’s work on the island and under the guise of Light Prime Thelcoda, Dyarra arrived early only to demand that tall, daunting cliffs and a temple be created to the far eastern side of the island. Confused, but willing, Dahlsea began crafting the cliffs and temple. While she was busy, Dyarr secretively tainted the cliffs with lies and confusion. The Prime of Lies planned for the cliffs to lure confused furres to their untimely deaths. The real Thelcoda, as if sensing something was amiss, arrived during this time to check on Dahlsea’s progress, only to find Dyarra disguised as herself. She cast the Dark Prime out before the cliffs had been tainted completely.

To this day, an aura of confusion is said to leak from the cliffs (though, much to the Dark Prime's distaste, it has become a popular drinking and partying spot). The crumbled remains of the half-built temple still remain on the cliff top as a reminder of the Dark Prime's deception. Cliff climbing and cliff diving are favorite pastimes of the local furres. 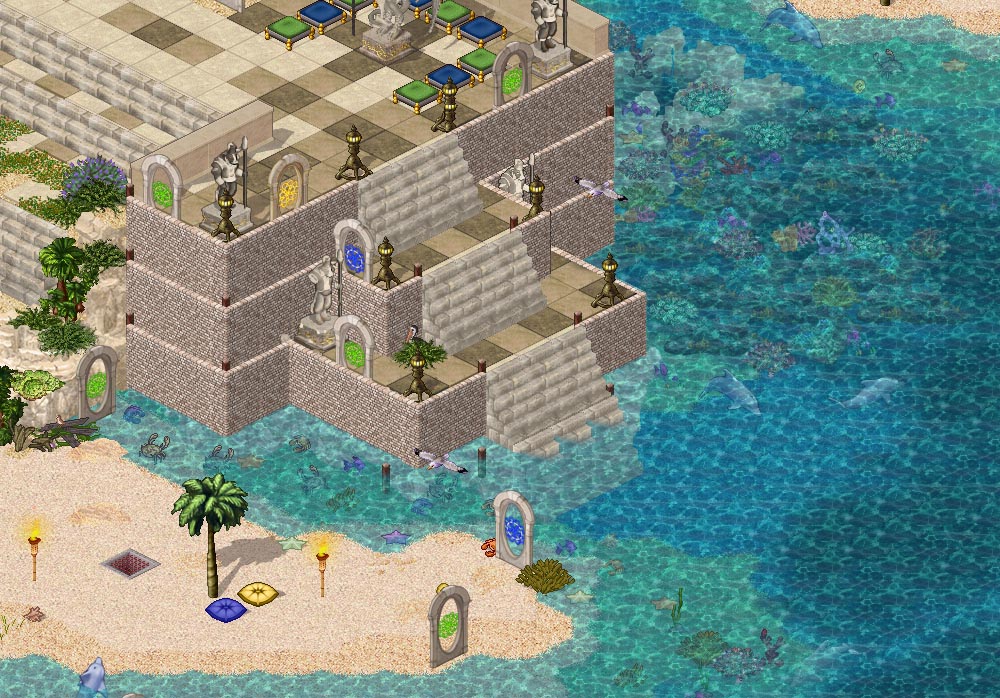 When Light Prime Thelcoda traveled to Allegria Island, it is said she was in a vessel made of light, and landed at the cliffs to the east of The Dreaming Sands. After casting out Dark Prime Dyarr/Dyarra, Thelcoda admired the island in all its beauty and wove it into the fabric of time where it would begin its material existence in Furcadia.

Furres built the landing up into the grand architecture it boasts to day in honor of Thelcoda. 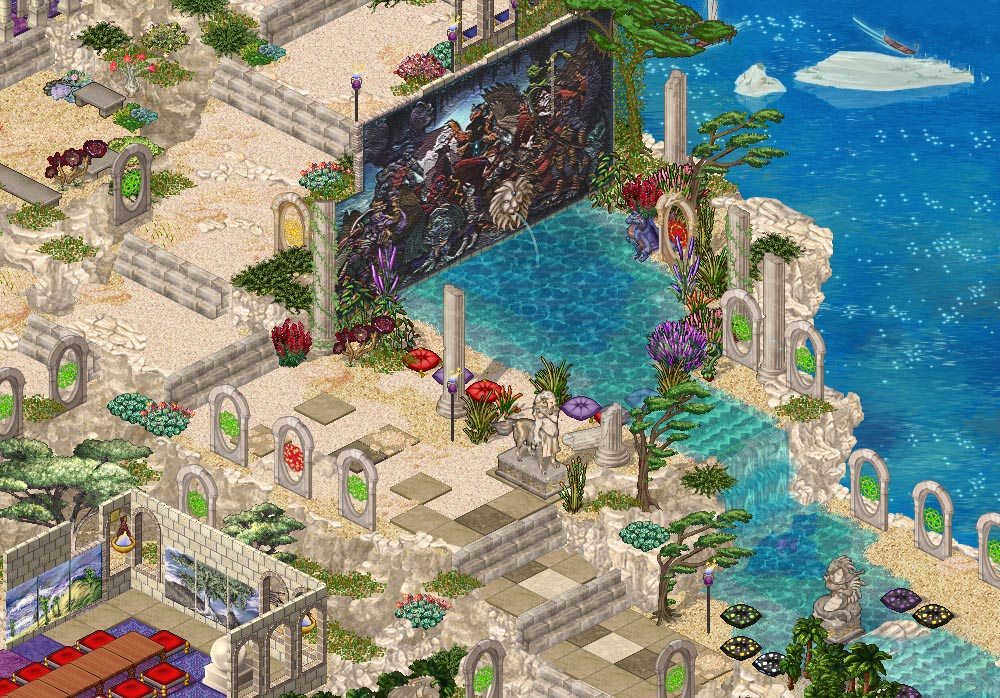 After Dark Prime Dyarr/Dyarra’s plans for The Cliffs of Insanity were thwarted, he/she gathered Dark Primes Chatengo and Suffrith who arrived together and saw The Baths of Light in all their glory. It was Chatengo who had the idea to create a darker version of the pools to mirror those, and so he did. The waters ran like liquid crystal down the eastern side of the island as the baths did to the west. However, as the Dark Primes tainted the waters with their powers, the pools darkened. Light Prime Dahlsea felt the changes in her island and traveled to the new pools as quickly as she could. When she found the Dark Primes there, it was too late. Despite this, the Light Prime still seemed pleased. She smiled and said there would now be balance on the island, between dark and light. And so she called on Light Prime Patrilius to create a mural of the Dark Primes to match the one at The Baths of Light.

Bathing in the waters is a gamble. Furres who bathe in The Pools of Dark can sometimes be filled with terrible schemes and plots, or become lost in their own self doubt. To the southwest is the infamous long table where wilder Furres can be found. 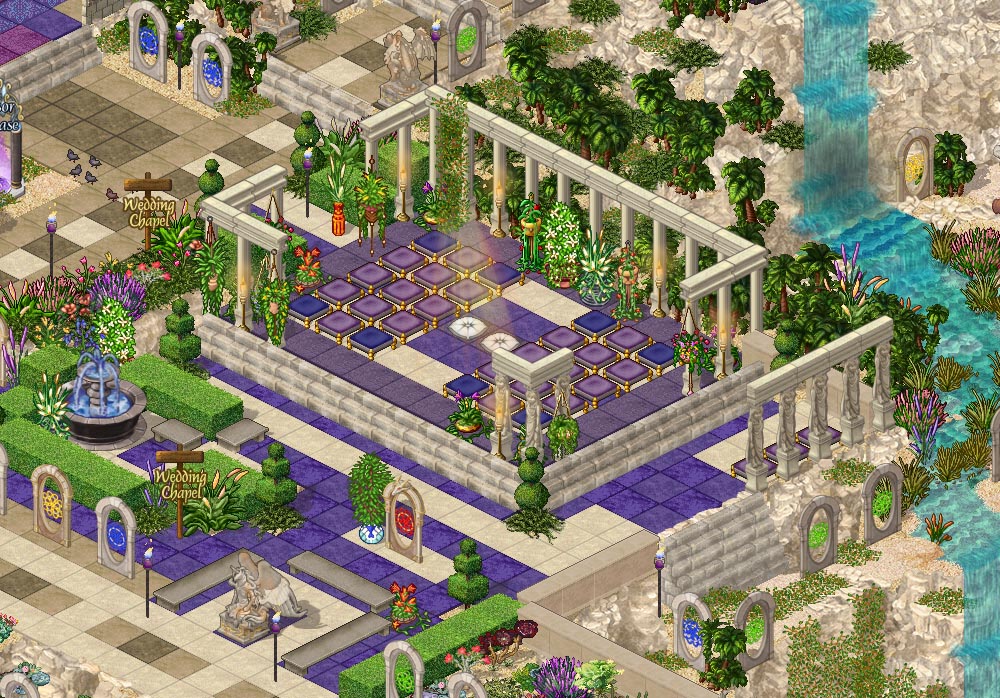 After Light Prime Dahlsea dealt with the Dark Primes, she knew that Light Prime Jujinka would be best suited to rejuvenate the land with much needed greenery. Jujinka breathed life into plants across the island, even creating new flowers found nowhere else in the world. It was then The Prime of Love came upon The Pools of Dark. She felt their corruption and it filled her with a great sadness. In an act of defiance, she built the Wedding Chapel, a place of love and union surrounded by plantlife to counterbalance the dark waters. 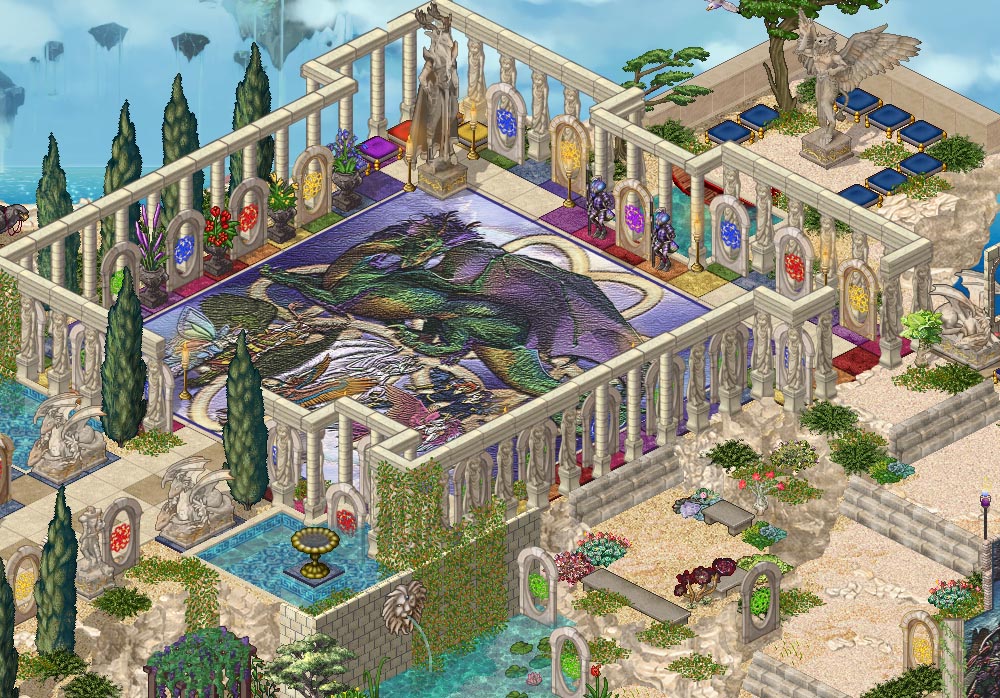 When the Island was completed, The Dragon circled Allegria Island in the pattern of the Vinca and breathed life into it. With His/Her great claw, The Dragon touched the center of The Hall of Dreams. Immediately, the island was overcome with a powerful trembling. Out of the stone, sand, and sea erupted beautiful stone portals. With a single powerful breath, The Dragon breathed magics onto the land, and lights began to glow at the center of every portal. With the island now fully powered by the magics of the Second Dreaming, The Dragon departed, leaving Prime Dahlsea to protect and watch over her new creation. It is speculated that on this day The Dragon blessed the waters surrounding the island with the power to grant furres wondrous Dreams and ideas.

In addition to admiring the murals and excellent views at the pinnacle of the island, many furres also use the Storyteller's Circle to the northwest of the Hall of Dreams to share the role of orators, taking turns to sit in the red seat in the center. 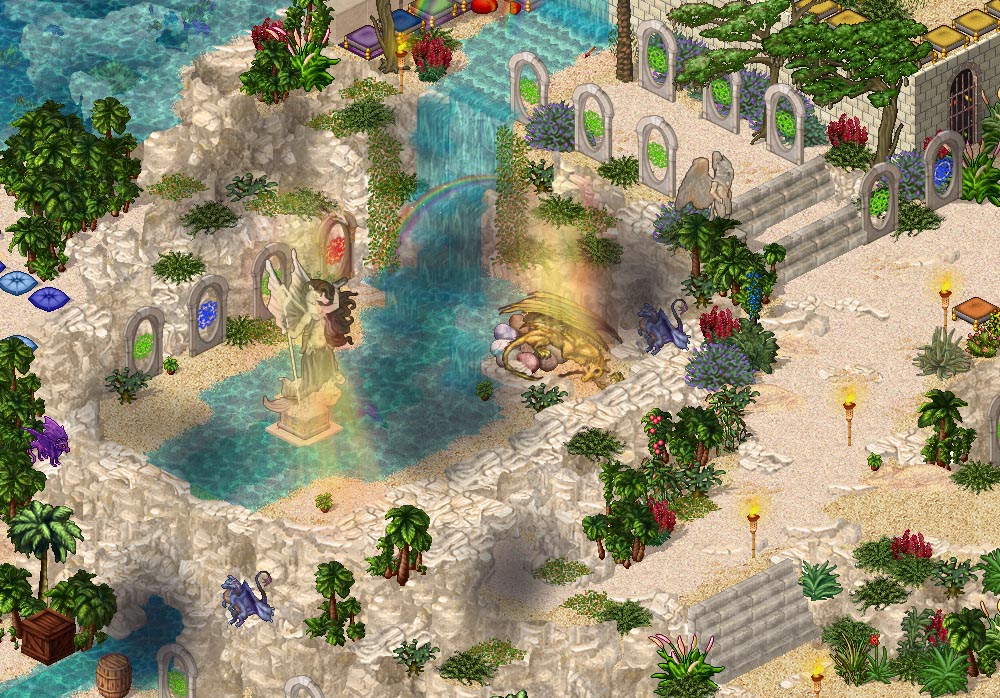 Dahlsea’s Grotto is a sanctuary to all who seek it. Fed by the blessed Baths of Light, this sunlit grotto is never short of pristine, flowing water. Prime Dahlsea’s likeness is depicted in statue form at the center. Her watchful eye is thought to protect those in need and is also a popular gathering point for furres who seek her guidance, such as the families of seafarers or weary fisherfurres. 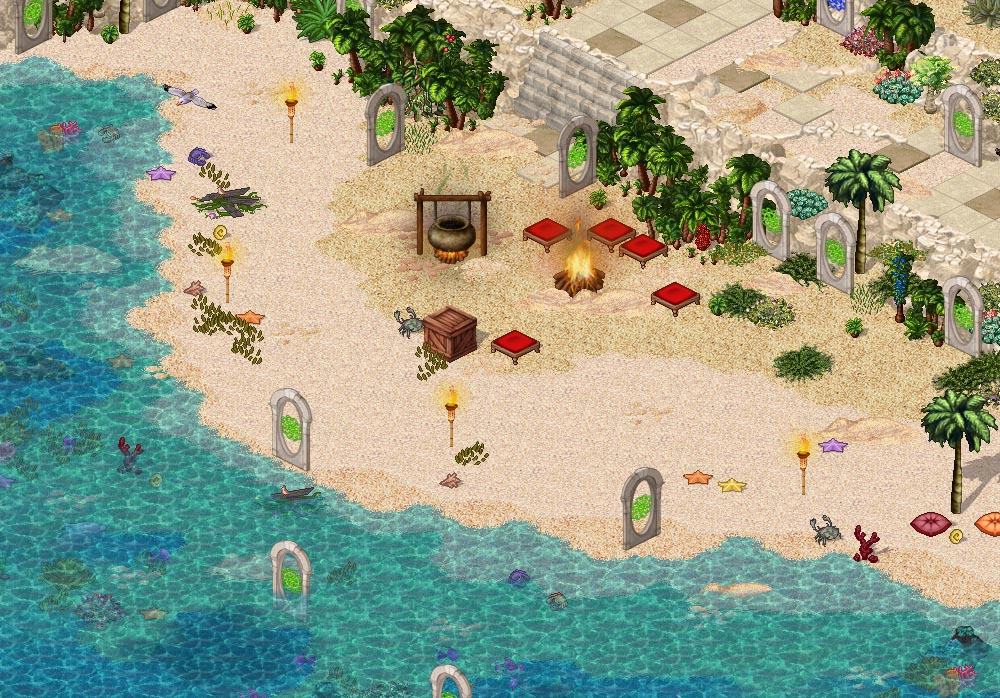 The Dreaming Sands are the pristine beaches on the south shore of the island. Furres come here to rest and relax, enjoying a cup of Pongo juice and finding seashells. It is believed that furres who fall asleep on this beach can sometimes have an epiphany, receive a message from the Primes themselves, or, rarely, be granted a vision of the future.

Want to download the patch artwork from Allegria Island? You're more than welcome to use it in your own Dreams however you wish! 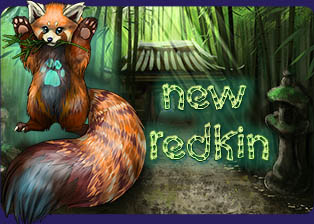