T'was a dark and spoopy night in the Wolf Howl Festival on October 30th, as we celebrated the 4th annual Halloween Hijinx. As everyone made their way in, we gathered around the StoryTeller's Circle to chat about Halloween and our plans.

After everyone had arrived and settled, we decided to start off with some mischief. We kicked off the event with some Trick or Treating!

Esmi, Icesis, Juliet, and Kufky hid around the Wolf Howl Festival while furres ran around looking for them. Once they found them, they were to stand in front of the Eventer Beekin and say "Trick or Treat!". Then, based on the roll of a die, they either were rewarded with a piece of candy for a treat, or smacked with a trout as a trick.

The objective was to visit each of the four Eventers and try to collect as much candy as possible. You could only revisit a previous Eventer if you'd visited all the others in between. First place received one week of all new Nightmare avatar! Second and Third place received a one day Nightmare! Our winners were:

Thank you to all the participants and congratulations to the winners!

After the intense Trick or Treating, we once again gathered in the StoryTeller's Circle to enjoy some fun Halloween trivia! Each question was asked, and the furre was to whisper Icesis with the correct answer, and in the correct sequence, won a one day Nightmare. Congratulations to our winners Wallaby, Metalucifier, KayKatt, and Lileo.

The final event for the evening was the fan favorite: Costume Contest! Winner(s) received a one month Nightmare, and all participating furres received a one day Nightmare.

We would like to thank all the participants who took part: Bitterness, Friesian, Metalucifier, Amabel, IraNik, Explosions, Floof Cop, Kashurra, Kangaroo, and Xela!

This competition ended up being a four-way tie between Friesian who utilized the amazing Nightmare to cosplay a stalhorse from The Legend of Zelda; IraNik as the mythical Japanese Kitsune; Kashurra as a Death Cleric; and Xela as a Vulpix from Pokémon! You all did an amazing job! 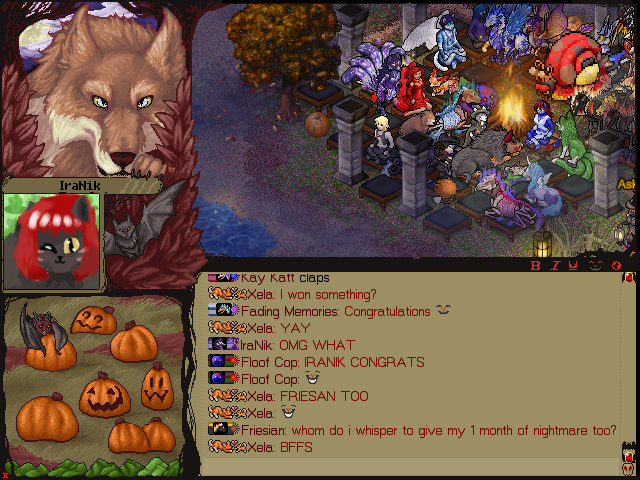 Thank you so much to everyone who came out and made this year's Halloween Hijinx a lot of fun and a great success! Be sure to checkout the Digo Market and pick up the new Nightmare before it disappears!

Remember to stay safe and have a happy and fun Halloween.