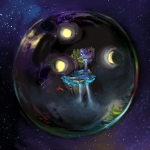 This dream is host to several distinct areas, including: a romantic fantasy setting with an extravagant tavern, caves full of exotic pleasures and sinful delight, and lush forests rich with feral wildlife.

In addition we have a large OOC chat to relax and socialize, if RP isn't your thing.

We have many openings for RP staff, and welcome all into our community!

Long ago, the lands now known as the Isles Serail were part of furcadia, nestled deep within dark forests of the mountain region. A small tavern resided there, where people who were lost in the forest could stop for a rest. It was a place where wanderers might find a home; until the day the inn was attacked!

The lands were sundered and driven into the skies by Azure and several of the inn's more powerful mages and now the lands float inside the Sphere, beyond the atmosphere of the world. This massive conflux of magical energies has become a black hole of sorts, the lands now infused with magic, so much so that it draws others to it from a multitude of lands, dimensions, even times.

Despite it's remote location, the Isles are welcoming to all with good intent. These starlit isles are now a haven for runaways, adventurers, and all varieties of magic users and creatures. Just about anything is possible in the Starlight Escape.

Read 9786 times
Tagged:
This page features user-submitted content, including images and comments. Dragon's Eye Productions accepts no liability for this content, it's validity or legality. This page does not represent the opinion of Dragon's Eye Productions or it's partners. Please consult our TOS page for further information, or to report offensive or infringing content.
Created: 26 October 2014 Updated: 26 October 2014
Back to Top